Visiting and Singing Dvorak in Prague!

Posted on August 30, 2019 by maryannniemczura

Established in 1869 on the grounds of the Vysehrad Castle is the final resting place of
many composers, artists, sculptors, writers, professors, Nobel Prize winners and others from the world of science. The Czech Republic celebrates those in the arts with an unusual cemetery called the Vysehrad cemetery. 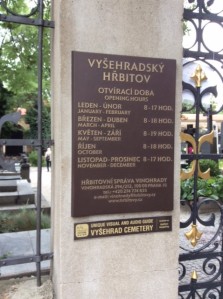 Unusual to us were headstones with musical notes, a conductor’s baton, a sculptor’s headstone among the many fascinating monuments of remembrance. We walked in Dvorak’s footsteps for a short while. Under sad circumstances, Dvorak composed his Stabat Mater in Latin, his only piece with a religious theme. He began it after the death of his two days old daughter, Josefa. Dvorak returned to complete the composition after his two surviving children died within a short time of each other. Completed in 1877, the first performance took place in Prague in 1880. 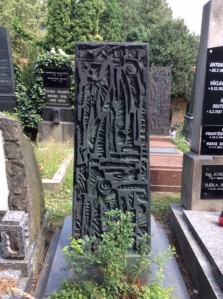 As we walked through the cemetery with our guide, we discovered a map with numbers and names of some of the more famous people buried there including composer Smetana. The grave sites are well cared for by family and friends of the deceased. This was a celebration of lives well lived. We left thoughts and prayers there before we performed the Stabat Mater in the Zofin Palace. Such a rich history and beautiful city left us awestruck by the loving care with which this cemetery is maintained. 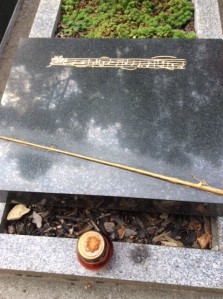 9 Responses to Visiting and Singing Dvorak in Prague!