Posted on January 9, 2016 by maryannniemczura

I love music and singing in the church choir. Having started as the church organist and choir member at age 13 in Pueblo, Colorado, I can attest to many experiences and in many places. Church choirs have their own  personalities, sometimes quirky like big families and their members.   Recently my husband acquired a briefcase-size bag with music motifs and treble clefs on the zippers.  A laptop fits inside nicely or music to carry to and from rehearsals.  My husband immediately dubbed it  the “Diva Bag”  much to my chagrin.

A few minutes late for warming up before the 11 AM church service, I started to unzip the bag. Inside were small noise makers in the form of plastic eggs with seeds inside to shake to the beat of the music such as in Latin music.  These fit in a hand quite easily.  I carried three in my Diva Bag.  Mind you, I don’t consider myself a “diva” and leave that designation for others: prima donna, leading lady, ingénue, starlet, soloist or virtuoso.  So in my bag were a Christmas folder,  the three plastic eggs, two copies of my book and a box of Authors card game to give to another choir member who knew the game well and played it with her children.  My book has a poem entitled Sitting on the Card which refers to an Authors card game we played in Massachusetts.  But I digress.

So there is one way to open the bag only on one side, but unfortunately and in a hurry, both sides were open and the contents spilled forth and fell amidst the music stands, microphone stands and piano: music, notebook, card game and books. Quite loudly I might add.  The eggs bounced about as the seeds inside made additional noise. This would have made a great short movie with the microphones picking up all the sounds. One of the choir ladies with a great sense of humor started helping me as I loudly banged into music stands while trying to retrieve the bag’s contents.  She poked fun and said I had brought cards for the  choir to play poker during the church service.  More laughter and looks from choir members.

I gave my books to a couple of the choir members and then put the music on my stand and pulled out the eggs and asked who wanted to play them for the closing hymn which had a lively beat.  One man  singing bass quickly reached out his hand and volunteered because he had done it before.  I asked a tenor and alto if they each wanted one and the alto replied that she had no “beat.”  So another alto took one.  She too had played before.  The bass then asked me how to play it.  I told him to just shake it and demonstrated.  The choir director suggested shaking it to the beat.   Some declined saying it threw them off when they tried to play and sing.  It is difficult to play and sing at the same time. I know from experience.

At the conclusion of the morning service, everyone was laughing and saying that it had been fun doing this. This would have made a great comedy routine or candid camera show.  Nothing was really planned, and most of the laughter resulted from the moments after the bag spilled  its contents. I would say that the choir  did well today even with the additional mirth and merriment.  After all, variety is the spice of life.

After I had returned my Christmas notebook as the director requested, I put my bottle of water inside my bag. The bass and I left church together chatting when I suddenly said that I had forgotten my water in church and started back in. I remembered then I had put it inside the bag.  A senior moment I asked the bass singer?  He laughed and said there are a lot of senior moments in life.  The right hand doesn’t know what the left is doing sometimes.  But that’s fine too.  It’s easier to laugh at one’s foibles as a retiree. 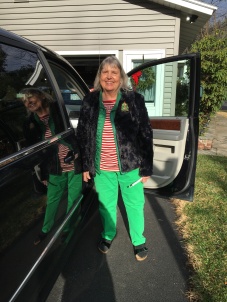 7 Responses to The Diva Bag