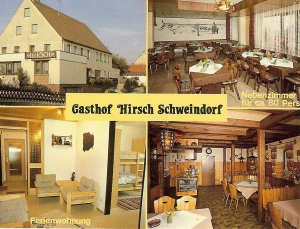 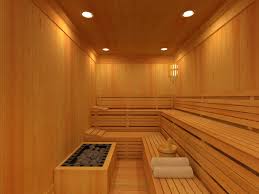 During my first Fulbright year teaching in Neresheim, my support teacher, Heidi, had a pool in her yard. We arrived in Germany on a hot July day and all the neighborhood kids asked Heidi if they could go into her pool which really only had room for a few kids standing. What happened next when all the boys and girls went outside was a frenzy of removing every stitch of clothing. When all the kids were in the water, I asked my two standing nearby with gaping jaws of disbelief if they wanted to go in too. No, they did not. Thus was our introduction to the topic of nudity in Germany. No one seems to give it a second thought.

As the year unfolded and my husband visited us during the winter, we opted to go to an indoor pool facility in nearby Aalen. More learning experiences ensued which are described in my poem.

The new year teaching in Germany
held unfamiliar promises and experiences.
After having studied there for three years,
I thought I was comfortable living in Germany.

This time was different though because
I had our two young children aged 3 & 6
along while my husband held down the fort
in the United States. Life as a single parent

in Germany proved to be challenging in more
ways than one. On his third visit, my husband
thought the entire family would enjoy a
day at the indoor pool in a neighboring town.

My colleagues told me about the Hallenbad or
indoor pool with sauna, steam room and
an outdoor heated pool which we thought
would be fun for our two children. We went

on a Sunday which was called Family Day.
Attracted to the high slide winding
directly into the indoor pool, my two
wanted to give it a try. First they

watched the other children slide down.
My daughter hesitated when she saw
the slide ended in deep water so we
simply splashed across the shallow end.

The water temperature was ice cold
by American standards so we moved
very quickly to get out again. We
then rushed to the outdoor pool

accessible through flaps much
like those at a car wash. The outdoor
air temperature was cold so now we
experienced warm water with fog.

What an adventure this was! We had
many near collisions with others
since the fog created from the cold air
was as thick as pea soup. Next

I suggested the sauna to warm up.
We entered and conversed in German.
I basked in the warmth of the sauna when
our daughter declared it was too hot for her.

We left to enjoy the outdoor pool again,
but I was the only one to return to the
sauna. There was a knock on the sauna door
and there stood the imposing Bademeister.

He was in charge of the entire complex.
Speaking to me in German, he declared
I was not appropriately dressed for the sauna.
Confusion swirled in my head. How can

that be? I am wearing my bathing suit.
Then I heard him ask me whether or not
I had noticed how the others were dressed.
Was this a trick question? What was I

supposed to notice? Bewildered, I
glanced to the left and right. Oh my! In silent
horror, it became quickly evident to me that the
others were attired only in their birthday suits.

How did I miss that? Oh horrors! Without much
reflection, I gathered my composure and
responded in German that where I come from,
we don’t dress this way in the sauna, and I preferred not to.

Satisfied with my answer, the Bademeister
said fine, left, and closed the door. The others
voiced their displeasure with me because
I was not seated on a towel as they were.

You have to be kidding I thought to myself.
Isn’t a bathing suit enough for the sauna?
Apparently not. Very annoyed, I decided to leave them
to their nakedness and bid them good bye. I later

explained to my husband and children about what had
happened to me on this family day. After this unnerving
experience I decided this was enough new culture
for a lifetime. The German sauna and I parted ways.

By the end of the year in Neresheim and Schweindorf, my two became fluent in the German language and German way of life as well. Shrieks of laughter and the sound of running water greeted me as I returned from teaching one hot June day. Following the noise, I called for my two who were out of hearing range. Our host family had rigged a hose with a showerhead and attached it to a pole near their garden. I smiled as I watched my children run through the sprinkling water in the buff. Amazing I thought and so different from that summer day of one year ago with Heidi’s pool. We now recall with fondness and laugh about those first days in Germany. Andere Länder, andere Sitten. When in Rome, do as the Romans do. 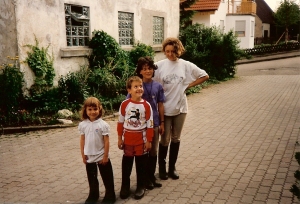 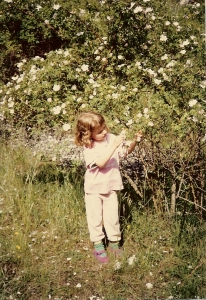 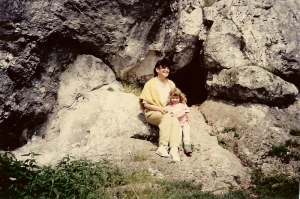